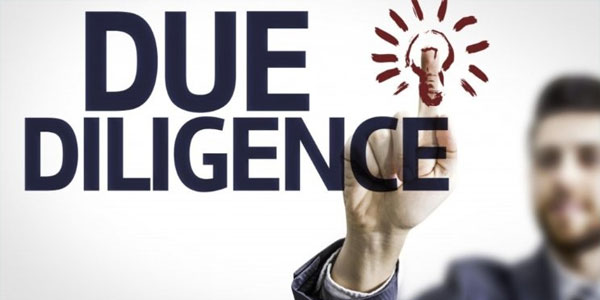 Due Diligence is an English term used to describe all procedures that verify the situation and the verbal or written statements of a legal (or physical) person.

It is also the process of ensuring that the information contained in a file or in a prospectus is accurate, complete and does not lend itself to a misinterpretation. Due Diligence is a process of fact-finding by iterations.

Where factual information is added to the due diligence file even if this information is general and does not directly affect the company, for example the size of a market, copies of the original documents proving its source must be obtained.

Any data with no verifiable source is worthless.

To be effective during the due diligence process, you must:

containing, as its name indicates, all the questions asked and all the requests formulated. In front of each question, in a response box, you must reference all the reference numbers of the due diligence documents proving the answer.

We should not allow everyone to get into the due diligence process, although everyone has to work together.

A single person must be designated as the primary contact for responses to due diligence. Often the controller or another member of the CFO team is perfectly suited for this task.

Requests for documents such as Company contracts, lists of beneficiaries of stock options or minutes must be channeled by the legal person in charge of the Due Diligence.

A relatively new employee who is not familiar with the records and history of the Company will not do the trick.

The lawyer of the Company must also designate a person responsible for due diligence to its study.

To ask questions and faxes, addresses, emails and other destinations authorized to receive them.

In the context of Due Diligence during an IPO, it is not uncommon for intruders to try to obtain insider information, which is why the Due Diligence officer must be particularly vigilant on the destinations To which it sends the information.

The History of Due Diligence

During an IPO, each question received and each response sent must be entered in the Due Diligence history with the dates, times and names of the operators who carried out it, as well as the means of communications used to question and answer , The addresses or destination numbers used.

While requests for due diligence rarely arrive at the right time, everyone benefits from better disclosure and protection from resulting liability actions.

The responsibilities and duties of Due Diligence are often the responsibility of the relatively young members of the team who only do what they are asked to do when they ask for evidence.

Obviously, the Company’s executives will always need to make themselves available to answer questions about the key aspects of the business.

If a request for due diligence is unclear or appears unreasonably cumbersome or disruptive, the Company and its lawyer must immediately raise the matter with the plaintiff.

The scope of an application can often be clarified or reduced.

What is the Standard Norm?

General Standards of Due Diligence

Standards for the due diligence for an IPO are as follows:

A director is not going to be holding a lower standard simply because this is the first time that this director is involved in an IPO.

A director will not be exempt from his due diligence obligations due to lack of culture or education and any director will make an effort to investigate particularly topics that he does not understand.

A director can not rely on accountants to “appraise” the chapters of the Prospectus when the director knows that these chapters contain partially false statements.

A director will not be exempt from due diligence simply because he joined the board of directors of the Company shortly before the Issue.

A director must not be satisfied with a Prospectus that has been “copied and pasted” in accordance with a Prospectus used by the same Company in connection with a previous issue and that does not take into account changes in the Company between the two Emissions.

A director must insist that the minutes of the board of directors to which he has not participated are written and made available for review prior to the filing of the Registration Statement.

When the wording of the Prospectus takes months, the director must determine whether the statements contained in the previous drafts are still valid and must be updated before the final version of the registration statement is filed.

What is "Defense by Due Diligence"?

In order to develop the “Due Diligence Defense” and to avoid an action for fraud, each party having drafted it must bear the burden of proof that, after reasonable inquiry, that party had a reasonable basis for believing, And truly believed, that at the time the Disclosure Document became effective, that the assertions in that document were true, that there was no omission of facts and that there was no omission Material facts necessary to ensure that the statements in the said Document are not misleading.

Underwriters may not be able to construct their due diligence defense if they do not follow meticulously on the problems and missing elements identified by their lawyer.

Underwriters may not be able to construct their defense due diligence if neither they nor their lawyer have reviewed the Company’s contracts, particularly if they are required to justify significant amounts such as, for example, Of orders.

Subscribers can not only rely on the assurances of the Board of Directors of the Company that the prospectus is factual, accurate and complete.

If the Subscribers delegate their obligations of due diligence to their lawyer and the latter performs his duties imperfectly, the Subscribers will suffer the consequences.

Naturally, these examples reflect only one particular case. The due diligence review required for a given assignment will depend on the situation and the reality surrounding the Company going public.