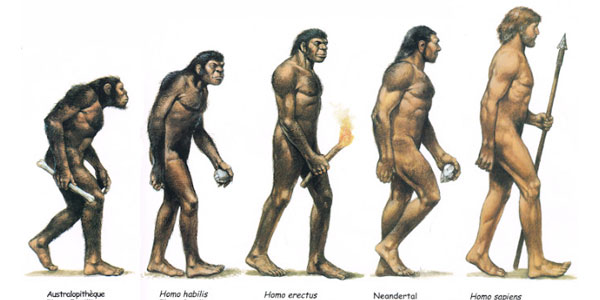 In the beginning of our story there was the homo putans (the thinking human being), the first prehistorical human who began to analyze and control his environment, in other words to think.

First, he lives alone with his family, assuming alone the daily tasks necessary for his survival. He hunts, builds and maintains his home, makes his clothes and brings back from volcanoes, the fire he needs to heat himself.

Later, he becomes homo sapiens because he organizes himself in society, having understood that so, it significantly improves his chances of survival and comfort..

The first form of society is the tribe, since previously he had around him only the members of his family; therefore, we cannot speak of a society in its own right.

Each tribe has its territory, delimited by natural obstacles chosen by fighting or by convention between tribes. This territory where the tribe governs its law, will be called a few hundred years later the place of jurisdiction and its law, the governing law.

From the life in society, from desires and feelings of each arise the problems and the conflicts which oblige him to establish the rules of life in society. Each member of the tribe must submit to these rules under the penalty of being excluded from the tribe. Here we can find the first manifestation of the notion of juridical order.

The division of tasks is also born out of life in society. The homo sapiens himself no longer carries out all the daily tasks necessary for his survival. He delegates most of them to other members of the tribe and specializes in one or in a few. He trains to perform those for which he specializes, improves the quality of his work, creates tools to facilitate his labor. He thus acquires a profession.

From this comes the need for an obvious exchange, which will manifest itself first of all by barter. The hunter will exchange meat and skins for fire, tools or a dwelling. For a long time, barter will be the daily lot of homo sapiens.

But where to deposit the products of the hunt, how to protect them from wild animals, bad weather and rival tribes?

In the caves, of course, which are guarded by a group of homo sapiens who maintain the fires which, in turn, drive away the wild beasts. They also fight the rival tribes. These caves are the ancestor of the safe, the vault and even, notwithstanding, of the bank.

Indeed, if one does not yet speak of a bank and even if the bankers prefer to claim themselves as arising from the merchants of ancient Greece, more elegant, who made their foreign exchange and lending on a bench, hence the term bank.

As a banker, the fact remains that Athens is a few tens of thousands of years later and that the concepts are already established in the prehistoric era. (What a pity that we did not find the remains of the homo banker, I would have liked to have a skeleton in my office, maybe they were already too rotten so that their bones could reach us .. But nostalgia misleads me.)

However, bartering is impractical and with the age of metals appear the first signs of a new mode of exchange: the currency.

This revolutionary mode of exchange will change everything. Instead of looking for a clothing tailor who needs meat, the hunter can exchange his meat for money: this is the appearance of the sale. One no longer exchanges, sells, or makes himself proprietor by the act of purchase; To buy, one has to pay the price, that is to say to give a quantity of money to the seller. The price is fixed by a compromise between the offer of the seller and that of the buyer. The homo sapiens then began to develop his profession, to systematize his activity. One can not yet speak of industrialization because it lacks the machine, but one can evoke the concept of enterprise, even if it is still only in the basic artisanal stage

A few millennia pass. Homo sapiens became a man. The caves have become banks. With the practice of payment, banks had to learn to communicate; As there is no telephone or telex, banks use commercial paper to instruct their local correspondent to remit a certain amount to the bearer or the holder. This is the time of the letter of credit (which has nothing to do with the English “letter of credit” because it is referred to in French as the “letter of credit”). The letter of credit will lose its importance with the appearance of modern means of communication, until today, if not a rarity, at least as an instrument of limited use.

This little retrospective that has no historical claim, has only one objective: to demonstrate that the fundamentals of finance and the concepts that govern it go back to the dawn of time, that they are not an abstract sophistication. Since man began to think, that he had the will to organize and then to undertake, appeared the notions that created the basis for the birth of Finance. We see that its foundations are self-evident, that Finance is human, if not natural, despite an inhuman aspect …