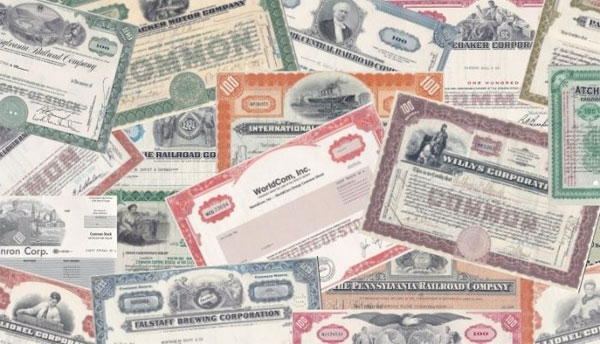 The distribution of shares of stock, of bonds or of any other sort of securities can be done in a private or public manner.

Everywhere in the world, any distribution of securities is highly regulated by the legal order. This arises from the very nature of the security that incorporates a right or an obligation on a support, but whose neither quality, nor value, nor problems can be determined by examining it.

Traditionnally, it is a certificate, a document made out of thick secure paper as the certificates of shares of stock show hereabove. But with the evolution of the stock markets and stock exchanges that followed those of information technologies answering to the need to accelerate the speed of transaction, the support has dematerialised to become first a register, and then a database.

However, in the private distribution world, the security is either always a certificate, or a register of shareholders or of bondholders help by the issuing company of the securities in question called issuer.

The issuer, products and services he proposes, the markets it addresses, the securities intended to be sold to the investors to be financed, the risks the issuer incurs and those that the investors will incur by purchasing these securities must be assembled into a disclosure prospectus sometimes called Private Offering Memorandum. and other times Private Placement Memorandum.

It should be clear that that last designation is both more frequent and more ancient. Today the regulator recommends its use in case of securities issued by a public company, that means listed on a stock market but distributed privately.

In the much more rare case where private distribution aims at the resale or at the total or partial liquidation of the participation of a shareholder or of the bonds of a creditor, the distribution is made through a prospectus called Private Distribution Memorandum.

This exceptional case is a situation of distribution on the secondary market, that is whose proceeds of the sale goes to a third-party shareholder or creditor and not to the issuer as on the primary market.

In insider jargon, they are referred to by their acronyms P.O.M., P.P.M. and P.D.M.

The Essential Rules of Private Distribution