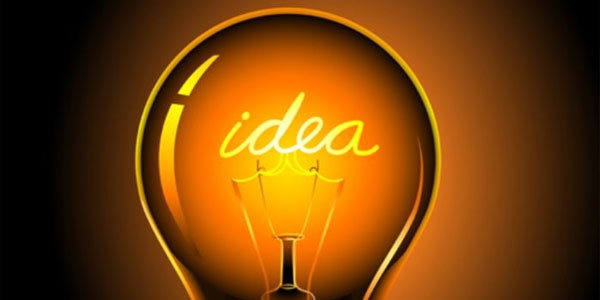 He has ideas over all, but overall he only has ideas. Coluche (french comic)

You just had an idea, simple, original and the few selected friends you shared it with consider it genial and serely lucrative. Of course, each one of them wants to buy your product, to use your service and describes with strength of conviction, how much he is impatient to consume, how great and revolutionnary your idea is.

All except for one, Philippe, but one cannot please everybody, can he ?

And anyway, Phil is always negative…

Under these circumstances, we should get started immediately, because there is no time to lose, if there is at least one human being on earth who would have the same idea or more incredible, a better one than yours…

If one does not want to go in the wrong direction, one needs to start all over again. Whatever is well conceived is clearly said and the words to say it flow with ease, as the old adage says.

Take thus a sheet of paper that you divide into two horizontally in the middle, then again into two vertically in its lower part only as shown in the figure hereunder.

You must resist the Entrepreneur’s maniac trend who dreams, to describe his dream in all slightest details.

Here, you must simply research all arguments in favor and all arguments against, in all honesty, with the maximum of objectivity you are capable of.

In the Description box, describe your idea in a simple and factual manner, without attempting to sell it, nor to convince the reader. The description of the idea must contain, among others, the pursued Goal and the intermediary objectives.

In the bottom left box, write in column all arguments in favor. To provide a simple definition of the argument, it is simply an advantage or an element advocating the idea.

Finally, in the bottom right box, write in column all arguments against that you will be able to figure or imagine. The definition of argument against arises directly from what precedes. It is an element defavorable to the idea that can be an inconvenient, a negative consequence or any other form of undesirable effect.

I shall provide you with a few insiders tipps, just between us. People who talk a lot are rarely these who buy and the most revolutionary products only raise sober comments, simply because their use is obvious.

You are right to tell me it is too thin a market study or as argumentation, but it is the beginning of a reconsideration. The second part of this reconsideration, you will not be able to do it alone.

No, I am not selling you a service or even recommending a consultant,[1] simply go back to talk with Philippe !

Listen to his arguments, encourage his approach, support his critics and note carefully his objections.

Be fascinated by the problems raised by his critic, for the obstacles he highlights. Find a common characteristique, a guiding line to his talk.

Your arguments must be far less interesting to you than his objections.

You must not fear to see your idea sank. Often, the strongest ideas are made out of ruins of other ideas and chesses.

Play with your idea, adapt it into several variations, make yourself critic, and then supporter of this idea.

What are the objectives targeted by your idea ? Are those realistic and realisable?

Play with your idea does not mean to pile up the arguments in his favor nor to get a swollen head. That means at the contrary to challenge it, to sieve it, to examine its implications and consequences.

This reconsideration of this idea must even extend to yourself as its author. Imagine yourself in a situation where the goal would already be reached.

In which position would you be?
Do you really want to become an Entrepreneur?
Why is this idea so interesting to you ?
What do you have to prove yourself and to the others ?

When you will feel your idea ready and that you master it perfectly, after having discussed it with several interlocutors, it is the moment to start conceptualising it.

Many persons believe to have an idea worth gold and that could well be the cases ! To have an idea is easy, what is difficult is to find the ideas that will allow you to make money in function of your skills, of your experience and of your centers of interests.

It is one thing to have a sensational idea, but what is more important, is to know what to do with this idea and how to reach an end. An idea has no value until it becomes a concrete product or service sold at a price of the consumer or end user is ready to pay.

To help you conceptualise your idea, I propose you a standard, simple and pragmatical approach that you will all the same have to personalise according to your field of activity.

[1] Although if you are ready to pay the price of a professional consultant, I am at your disposal.